The Dark History of Blackout Curtains

Blackout curtains and blackout shades are popular window treatments for many reasons. They provide almost total darkness in any room, from a baby’s nursery to a home theater. They block noise, making them a great choice for home offices. And they save energy by trapping heat in the winter, and keeping rooms cool and dark during the summer.  Whether you suffer from migraines, work the night shift, own a hotel, or live on a busy city street, the blackout curtain may very well be your best friend.

While blackout curtains are hung in today’s homes for all these reasons, they actually have an interesting and complex history, one that has nothing to do with sleeping in the daytime or a young child’s nap time ritual. It begins during World War II, when blackout curtains became a powerful part of the Allies’ defense.

History of Blackout Curtains: During the war, nighttime air raids were a major threat in most northern European cities. Lights from houses and streets were viewed as a dangerous liability, as they could lead bomber planes straight to their targets. To combat this problem, Britain began enforcing blackout regulations in1939, in the hopes of leading enemy planes and ships astray, and protecting their citizens from attack. 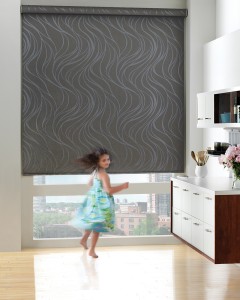 At first this meant dimming streetlights and covering the headlights of automobiles with tape. Schoolchildren even “knitted for Britain” to create handmade coverings that could block light sources. Eventually, the blackout regulations also included the windows and doors of homes, because even the yellow glow of a bedside lamp could put a household at risk. The government went to so far as to make blackout material available and affordable for all, so it would be easier for everyone to adhere to the regulations.

Although many people found the blackouts tedious (covering the windows each night was time-consuming and stressful), others came to appreciate the hidden benefits that the material provided. After the war ended, blackout curtains and the materials from which they were made evolved, eventually becoming the sleek, easy-to-use, and highly effective curtains you see in homes today.

The next time you pull your curtains closed, take a moment to remember the surprising past of blackout curtains. It’ll make you appreciate the darkness a little bit more!