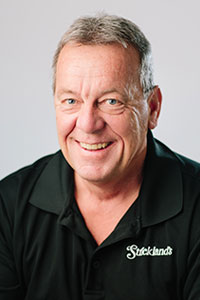 For Don Cunningham, installing blinds, shades, and shutters is in his blood – “I’ve been doing this my whole life,” he says. His father was a contractor and Don picked up the skills of the trade from him over the years. Straight out of high school, Don followed in his father’s footsteps, landing his first installation job. He found a home at Strickland’s because of the company’s tight-knit culture and devotion to team-building and open dialogue. As he says: “It’s a good group of people, kind of like a family.”

When Don isn’t installing custom-designed closets, you can find him on the coast. “Boating, beaching, surfing, whatever has to do with saltwater, I’m there,” he says. Unless, of course, he’s in his garage workshop. As he jokes of the home he shares with his wife of 30 years, Kathleen, “The garage is mine, the house is hers.” Don and his wife have two children, one in college and one that’s graduated already, along with two rescue black labs, Bella and Callie.